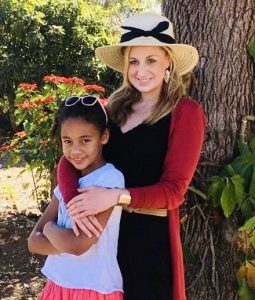 Sarah Dilling, head of the Advivia Zimbawe project, gives us insight into her experiences. She lives partly in Germany and partly in Zimbabwe, to advance the development project.

A Gift from Heaven

In recent months, it had become clear that another car would be needed for the work in   Harare. So Sarah began to pray for it. 5000 $, she estimated, would probably have to be raised. Completely unexpectedly, someone from Germany promptly contacted her and told her that they wanted to support Sarah with a donation of $ 5000. Encouraged by this unexpected donation, Sarah started to look for a car – but initially without success. After some time, an Audi that had only 50,000 km on the clock caught her attention. Just for the sake of interest, her employee asked what it cost (she expected about $20,000). The trader originally asked for $9,000. But because he urgently needed money, he was prepared to give it away for $7000. Now Sarah prayed to God with the question of whether this should become her car – and received a text message from the treasurer in Germany in response: a donation of €2000 had been received. Sarah took this as a clear sign from God, agreed the step with German headquarters and went ahead and bought the car.

A big thank you goes to God and to the donors.

Sarah managed to move house just in time for 01.10.21 including the construction of the solar system purchased by us. She and Emily now live in the Avondale district, from where Emily can walk to school on her own. There is a large main house with so many rooms that they can accommodate overnight guests. Right next to it is the future open-plan office with its own kitchen, toilet and adjoining room. The large garden in which the houses are situated looks like an oasis. Green in the midst of drought. There are further bungalow buildings whose use is still being considered. Now it’s time to buy furniture and furnish the house…

The construction work is progressing steadily. In the greater Masvingo area, the first buildings are gradually being built on the site in Mushangashe of the vocational training centre. Sarah is in constant contact with Alington Matsilele, who is in charge there. Sarah is also building a team in Harare to develop and later conduct life skills training sessions. It is becoming increasingly clear that her current place of residence is no longer adequate. It lacks an office, meeting room and guest rooms. After some searching, Sarah has found a large, relatively cheap property for rent. One good thing about it is that she can live there with her daughter. Emily now has it much closer to school and the accommodation is much more generous. From October 2021, it is now time to move again for the small Dilling family and the office of Advivia Zimbabwe.

A lot has been set in motion. Although Sarah has still not received her final work visa, she is now getting her temporary residence permit extended until she gets her long-term visa. She had to go countless times to the government offices and describe the work of Advivia. As a result, she got to know many civil servants, including high-ranking people. They are all very sympathetic to the building of the vocational training center and were often happy when Sarah had to come again.

A fantastic side effect has benefited the Chidzikwe Secondary School: thanks to the enthusiasm of one of the government officials, several times the school was sent whole class sets of new textbooks! After more than a decade, teachers and students can now   easily acquire knowledge from books.

Sarah and her Zimbabwean team are now entering the first practical construction phase on the training site, made possible through very diligent preparatory work. Concepts and applications were worked on for many hours. Again and again they drove from Harare to Masvingo, attended training courses and tirelessly made contacts. Now it’s time to get started…

Here is some information about Sarah’s everyday life in Harare. In the meantime, the internet to her house has been connected. The most recent information relates to the work visa, which Sarah was promised.

Sarah is currently putting together the team for the Lifeskill training training at Young Africa. The team so far: Ray and Duan (Djuid) as men, Sarah and Ndina as women. The training course will take place in mid-April in Harare.

Sarah has been back in Harare since Monday, 22.02.2021! For the past six months she and her daughter had been living in Berlin-Lankwitz in a guest apartment that was made available to them. There was a lot to plan and organize, which is important for the further work in Zimbabwe. In Berlin Sarah was able to deal with many matters and she is now continuing with new energy in Harare. The further development of the trust in Zimbabwe is very important. So Sarah will go with Ray Zowa to Masvingo to take the next steps together with Alington Matsilele. 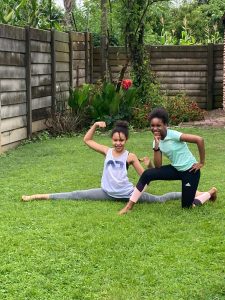 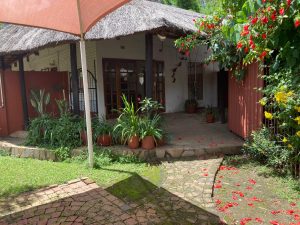 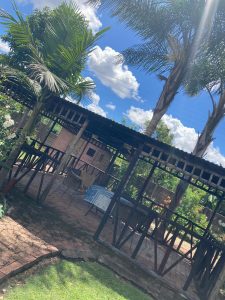 Sarah was planning to move back to Zimbabwe soon because the number of Covid-19 infections has fallen and schools were to reopen. Unfortunately, the virus mutation has changed the situation. Here is a message from Sarah:

I have just received a number of messages from Zimbabwe: the country will go into a new lockdown for 30 days with immediate effect. Apart from supermarkets, pharmacies and hospitals, everything else is likely to be closed and there is a curfew from 6:00 p.m. to 6:00 a.m. People are being encouraged to stay at home and only leave their homes to buy food. The Corona cases have probably risen so much due to the family reunions over the Christmas holidays (many people came from South Africa) and the hospitals are all full to capacity. To get a bed in a private hospital a deposit of several thousand US dollars is required… A number of people have died due to Corona in recent days, and some prominent people are among them. Schools are closed, except for the classes which are taking examinations. A new lockdown, in which the economy will be largely paralyzed, will have far-reaching consequences for Zimbabweans, and famine is foreseen. My heart bleeds when I think about what it will mean for individuals. Whether we will be able to carry out further food distribution campaigns remains to be seen, because it could actually be very dangerous for our team and at the moment almost no one is allowed to travel or to move far from home. Please pray for our brothers and sisters and the people of Zimbabwe!

Sarah Dilling and her daughter have been back in Germany since the end of August. After it being very difficult to leave the country for a long time, it was suddenly possible to get a flight to Berlin relatively quickly.  The two of them have now undergone quarantine and a Covid-19 test (negative). They are preparing for normal day-to-day life with school and work here in Germany, because it is still completely unclear when a return to Zimbabwe will be possible.

The number of Covid-19 sufferers is rising sharply. Sarah keeps hearing of people who have died of the disease. The hygiene measures are not consistently implemented by the population. Many only use a face mask sporadically, to avoid trouble with the police. This allows the virus to spread freely. Sarah reports on this in a voice message (in German).

Emily is mostly at home for her protection and she has little contact with other children. She is coping surprisingly well with the situation and thinks up wonderful projects using her great imagination and creativity. Among other things, she dances with enthusiasm. Here is a short sample…

While the distribution operations were being carried out by the teams in recent weeks, Sarah was working her way through the administrative jungle of Zimbabwe. The result is that a registered association has now been founded there. In order to meet the legal requirements for an effective association, many hours of research were required, in which a young lawyer from Zimbabwe successfully supported Sarah. Not all the hurdles in the administrative offices and ministries have been completed as yet, but Sarah is on the right track.

Sarah went to Masvingo with her daughter to be present when food was distributed. In addition, Sarah is spending time on the final phase of founding  a registered association in Zimbabwe, to ensure that the establishment of a vocational training center meets all legal requirements.

We distributed a few food parcels to a facility for people with disabilities and received this letter of thanks.  Thank you for your great commitment. At present, through your support, we can provide vital help to many people.

I always have In mind James 1:27: to serve God, our Father, in an exemplary way is to take care of the orphans and widows and not let ourselves be corrupted by the world.

Sarah and her team, consisting of Ray, Ennoc and Desire, worked some days to complete exhaustion. Here is part of a voice message from Sarah (in German):

Today was a heavy day. We provided about 350 families with food parcels and were busy from 5 a.m. to 7 p.m. We tried calling door-to-door in rural areas, but that was not possible. People have NOTHING left. The shops in the villages are completely empty and the people cannot travel elsewhere. So of course the news that we were distributing food parcels spread like wildfire and people came running from everywhere around. This affected all of us emotionally. We were in a team of four plus the pastor and Bright, the manager of the wholesaler (who also wanted to experience a distribution campaign), and the truck driver.

First we went to the wholesaler to buy supplies. The food is stored in a building where a lawyer friend has his offices. He is very much involved in the relief effort. Emily is friends with his children and stays with the family while the adults are shopping.

Harare, 14 May 2020
Sarah and her team, consisting of Ray, Ennoc and Desire, worked some days to complete exhaustion.

On Tuesday we shall be buying groceries that will be distributed in the same week in Chitungwiza, a densely populated, predominantly poor suburb of Harare. The main recipients of the distribution will be orphans and the elderly.

As of today, the banks in Zimbabwe are open again! So Sarah is aiming to organize food distribution as soon as possible.

Sarah in Zimbabwe was having big problems with her mobile phone, which was no longer charging. She could not write long texts because the phone was not working properly yesterday at only three percent charge. The danger was that Sarah’s only means of contact with Germany would be cut off. It may seem strange but many Christians, who we told of the problem, began to pray for the battery of the mobile phone. This morning, the phone was 100 percent charged again! What a heavenly miracle! Now Sarah writes the following:

15 April 2020 Video of a purchase from the wholesaler in Harare. The goods are stored in the house of a law firm.
Berlin, 21 April 2020 Today, an interview with Sarah about the situation during the Covid lockdown in   Zimbabwe was broadcast on ERF (Evangeliumsrundfunk, a Christian radio station). Here is the link (in German): ERF plus

Tomorrow, 22 April 2020 you can listen to an interview with Sarah on RBB (Rundfunk Berlin-Bradenburg) Radio 1 at around 6.35 a.m. or listen to it later on the website. 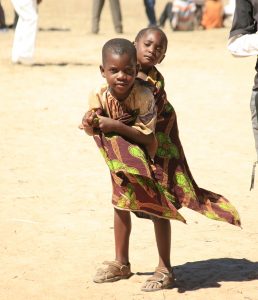 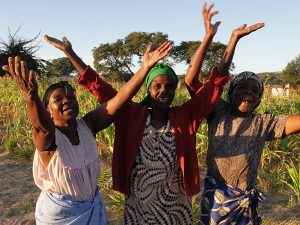